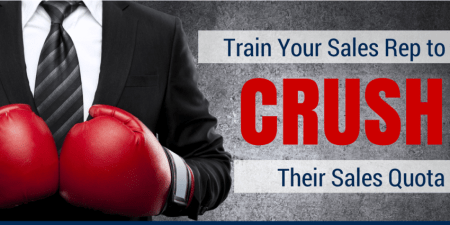 Train Your Sales Rep to CRUSH their Quota

Imagine this scenario. You’re a sales manager interviewing for an open rep position on your team. One candidate consistently achieves 200% of quota at her current job. Would you make an offer to this person?

No brainer, right? You hire this quota crusher on the spot, and congratulate yourself on snagging a great addition to the team.

But once she starts, she begins to flounder. Instead of 200% of quota, she’s not even making the minimum. What happened?

I think managers too often assume that new rep hires with previous sales experience already possess the necessary skills for success — a mindset of “they were successful there, so they will be successful here.” And in my opinion, this is dead wrong.

In the case of the 200% rep, there are several potential explanations. Maybe quota was too low in her previous position. Maybe she was being handed stellar leads from marketing at her old company, and therefore, has no lead generating skills — a critical piece of the rep role at your company. It’s really not so hard to be a superstar one place and a flop at another.

Assuming you’re hiring the right people in the first place, how do you ensure their success? In my view, it comes down to training. New reps are often thrown into the field too quickly, and their performance suffers for it. That’s why — no matter how much prior experience a rep might have — sales organizations should always take the following four steps to train your sales rep to crush their quota!

Everyone has things they’re good at and things they’re … not so good at. People just starting a job might not be forthcoming about their weaknesses, so you will likely need to employ some type of assessment, whether that be a conversation with a manager, role-play with an observer, a specific sales assessment, or a dedicated personality test like Myers-Briggs or DiSC. With skills and areas for improvement identified, you can tailor training to be maximally beneficial to the new rep.

New reps should be given the chance to shadow and learn from the best salespeople at your company. Just be careful that you’re choosing models you’d like reps to emulate. Some of the highest earning salespeople at companies can be what I term “rogue reps.” Their methods may work for them, but you wouldn’t want new reps to play copycat!

Once you’ve identified exemplary role models, make sure new reps have a solid chunk of time to observe and ask questions. A day or two probably won’t cut it. Why not? Odds are that’s not enough time to experience the range of calls a rep will field in this job, and you want to ensure that when new hires are turned loose, they’ll be familiar with the wide variety of situations they might encounter.

The amount of observation time a new rep gets will vary from company to company, but I think a two week minimum is applicable in most cases.

3) Assign a mentor and check in continually.

After the observation period ends, give each new rep a mentor, and have this individual sit in on the rep’s first few calls. This way, the rep has a person giving them feedback, and management has a source who can report on whether additional training is needed or not.

But the relationship shouldn’t end after a handful of calls — another common failure point I see fairly often. Instead, mentors should periodically observe the new rep at various intervals weeks or months down the line. This ensures the rep remains on the right track.

4) Give them the opportunity to retrain.

Training is an important part of starting a new job. But until a rep actually begins the day-to-day in earnest, it can be hard for them to fully absorb and apply what they’ve learned. After working for a few months, new hires will become more conscious of what they don’t know and areas where they could use additional coaching.

Once they’ve gained this perspective, give them the opportunity to return to observing or go back to training. Nobody learns everything the first time through, and the chance to make course corrections early on is incredibly valuable to both the rep and the company. Why let new hires scramble needlessly?

I realize that this can seem risky, as it costs money to pull a rep out of the field. But in my experience, large companies train and then lose about 30% of their first year reps. What’s more expensive in the long run — a little more training, or having experienced talent go to a competitor? Think about the bigger picture.

Would you like to make sure your sales reps can crush their quota? Let’s talk about how to make that happen. Use this link to schedule a 30 minute coaching session that will leave you with ideas you can implement immediately.