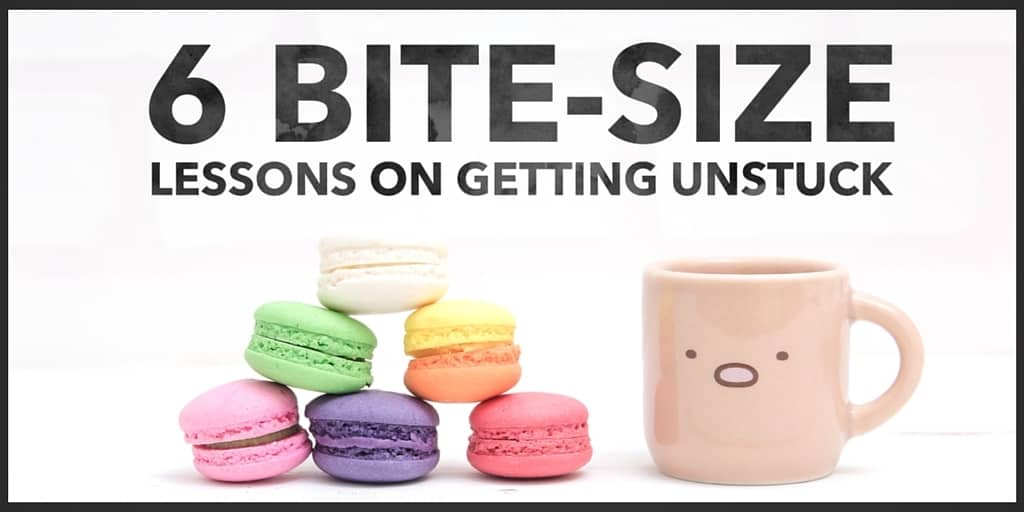 6 Bite-Size Lessons on Getting Unstuck

Getting stuck sucks. Whether you’ve hit a wall on a huge project, or lost a customer we’ve all been stuck. There are countless ways to get unstuck, but to make it easier for you I’ve gathered a few of the top videos from the LinkedIn Group, GetUnstuck- By Salespeople, for Salespeople. Let’s start with a simple yet effective method of getting unstuck by Alice Heiman. It’s a real treat (pun intended)!

1. How to Get Unstuck – @AliceHeiman

2. How to Get Unstuck and get Clarity on a Deal – @DaveSelinger

3. How to Get Unstuck and Get Over Rejection – @SalesProInsider

Often salespeople will get stuck when they’ve poured all of their heart and soul into a deal and it gets rejected. Nancy Bleeke recommends allocating 1, 3, or 5 minutes for feeling bad about that rejection. By acknowledging the rejection, but also giving yourself a set amount of time you can move on easier. If you get stuck after being rejected give yourself a finite number of minutes to get unstuck, and then move on.

4. How to get Unstuck When You Feel like Quitting- @aSalesGuy

Keenan says the best way to get unstuck is not getting stuck in the first place! When you’re stuck that’s your mind telling you that you’re about to give up and quit. What you need to do is flip the script, and realize that you just have a problem you don’t know how to solve…yet! He recommends: Reaching out and asking for help, talking to a mentor, and researching your answer online. One of my favorite quotes from his video is, “Never let the stuck mindset settle in and you’ll never need to get unstuck.”

5. How to Get Unstuck by Not Focusing on The Deal – @HeinzMarketing

Matt Heinz, of Heinz marketing, has a great way to get unstuck when your deal isn’t moving forward. He recommends not focusing too much on your deal. If you are continually asking your prospects “Where’s my contract?”, it gets old really fast and can end up annoying them. Instead, he recommends reaching out to them with something that interests them that doesn’t have to do with the deal. He has a great example in the video. One way you can learn more about your prospects interests is through social media. Do they love a specific sports team? I bet if they do, they’ve posted about it on their twitter or liked a sports page on their Facebook. Use social media to learn and engage with your prospects, Matt did and ended up closing a stalled deal!

6. How to Get Unstuck by Creating Value – @JackKosakowski1

You need to be an advocate for the buyer vs being a sales person. To become an advocate jack recommends using social media. Try going to their LinkedIn and see if you can share any of their LinkedIn publisher articles. Ask yourself how can I help them generate business? Which will lead to bringing them back into the conversation and establishing a strong bond between you and your prospect. Jack sums it up perfectly, “Add so much value to your buyers on social media that you inspire your buyers to want to give you their time and business.”

Getting stuck happens, but it’s the way you approach each situation that makes the difference. If you need a few more ideas, email me at alice@aliceh2.sg-host.com.