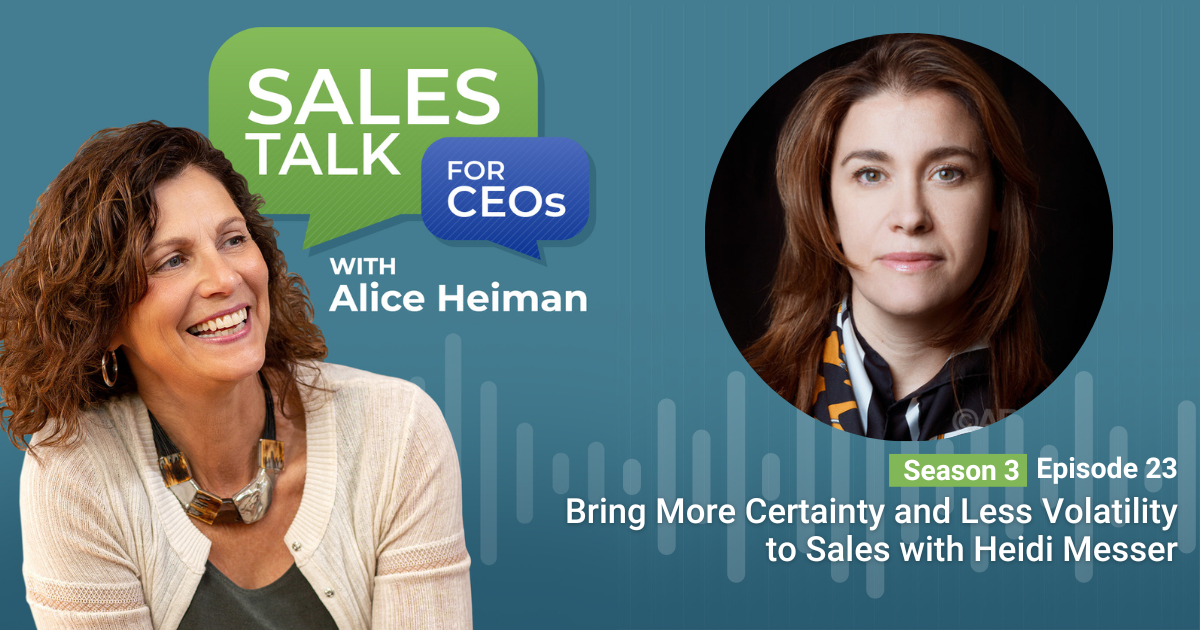 Heidi Messer started Collective[i] with one goal: to bring more certainty and less volatility to sales and improve the livelihoods of every single employee.

According to Heidi, sellers operate at 30% productivity rates. There is no other function in a company that is as unproductive as sales. Higher productivity equals more certainty, so why not improve it. If sales improves every other department has more opportunity. 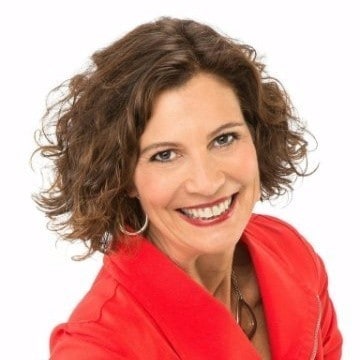 It’s time to bring more certainty and less volatility to #sales. On this week’s episode of #SalesTalkForCEOs @heidimesser shares two main innovations in order to accomplish this Alice Heiman Click to tweet

This is one of the most comprehensive interviews on the modern sales process I’ve ever recorded.

Watch the podcast below or on our YouTube channel.

Highlights of this Episode:

[01:19] All of the time that is spent trying to fix the problems in CRM, we fix so that sellers can sell, managers can coach, and everybody else has absolute transparency into what’s happening.

[02:23] Nobody trusts the pipeline reviews. So let’s just start with a clean capture of data into the CRM and have it done automatically. Nobody has to worry about trusting it.

[02:36] You know that sellers operate at 30% productivity rates. There is no other function in a company that is as unproductive as sales.

[03:16] Instead of trying to figure out what happened, we want people to focus on adapting to what’s likely to happen.

[04:25] What was interesting about the mid 2000s is we actually saw marketing transform from being a gut based endeavor to one that was highly scientific, very adaptive and focused on optimization.

[06:54] We’re going to own siloed data, not just within companies, but between companies. Everybody told us it wouldn’t work. I’m convinced that if you haven’t heard that, you don’t have a good idea.

[07:33] Sales is the lifeblood of companies. Our entire economy depends on sales. If you can bring more certainty to sales and less volatility, you impact the livelihoods of every single person employed by a company.

[08:17] There’s no entrepreneur I’ve met who isn’t a great salesperson.

[10:21] When you start out with a new product you have to find out what’s important to their (you customer’s) business? How am I going to persuade them to try this new thing? And then somehow I think what happens when you grow is you get out of that habit of thinking that way,

[11:12] There’s a significant portion of companies that still believe sales itself is a process, meaning sales is an assembly line. It’s not, it’s more like a sport that needs a playbook and lots of practice.

[15:53] You have to hire salespeople who are able to be trusted advisers. Do they have fundamental sales skills? Do they have enough knowledge that they can provide people with advice on how to move forward and not just explain something?

[16:58] I think there’s a massive defining line that happened after COVID, and I don’t think we’re going back.

[22:33] If you’re a good founder, you pick advisors who are smarter than you. I want to hire an expert in something that I may not be an expert in.

[29:11] Agile sales describes an organization that’s working perfectly in sync to adapt to changes that are happening real time in marketplaces.

[31:46] We automated everything that they were doing that was low value. So there’s not a seller that spends more than 10 minutes a week in CRM.

[32:37] We don’t do annual sales conferences, we do quarterly, we call them ARCOS revenue kick offs. More importantly every week our sales team has at least 1 to 2 training sessions.

[33:57] I think it should be sellers are selling to buyers in a transparent environment. Why should anything be hidden today? There should be no opacity in business.

[36:49] Sports team would be crazy if they said, I’m going to give you a playbook. Go on the field without practice.

[42:38] We invested a lot in upskilling our salespeople. We invest a lot in digital. So my belief is if a website could do it, a human should not.

Heidi Messer has been an active entrepreneur and investor in the digital economy since the commercialization of the Internet. Ms. Messer currently serves as co-Founder and Chairperson of Collective[i].

Prior to Collective[i], Ms. Messer and her brother, Stephen Messer, co-founded LinkShare Corporation, host to one of the world’s largest online affiliate networks representing the world’s premier publishers and merchants on the web. The company is widely considered to be a pioneer in the world of SaaS, digital advertising and the sharing economy.

Under Ms. Messer’s leadership, LinkShare was recognized by Deloitte and Touche for two consecutive years as the fastest growing technology company in the New York Region. Ms. Messer served as a board member, President and Chief Operating Officer of LinkShare until its sale to Rakuten (4755:JASDAQ) for $425 million.

Ms. Messer is a frequent speaker at conferences and universities around the world on artificial intelligence, enterprise technology, entrepreneurship, modern sales, marketing and the future of work. She has been cited in various publications including, The New York Times, The Wall Street Journal, Inc. Magazine, Vogue, the NY Post, The Nikkei, Women’s Wear Daily, and Chief Executive Magazine. Ms. Messer has also appeared on national television and radio programs including the Today Show, Rock Center with Brian Williams, Business Talk Radio, CNBC, Fox News, CBS Morning News and the Fox Morning Show.

Ms. Messer has received several honors including being selected as one of the 100 Most Intriguing Entrepreneurs by Goldman Sachs (2012) and is a recipient of the Technology Pioneer Award during Women’s Entrepreneurship Day hosted at the United Nations (2015). Ms. Messer serves on the board of Aperture Investors, the Partnership for NYC, the Partnership Fund for NYC and the Board of Trustees for New York-Presbyterian Hospital as well as the advisory board for the Johns Hopkins University Department of Physics and Astronomy. Ms. Messer is an advisor to the AXA Venture Fund and serves on the investment committee for The Equity Alliance.

You can learn more about and connect with Alice Heiman in the links below.
Website: https://AliceHeiman.com
LinkedIn: https://www.linkedin.com/in/aliceheiman/