Note from Alice: Want to know one of my secrets? I use Twitter lists to keep up with clients, prospects, and colleagues, and keep current on the trends in sales and marketing. There are SO many ways you can use your social media platforms and Twitter lists are one I love! Sabra Rubinstein, who was our Social Media Marketing Manager for 3 years, wrote this great article on how to use Twitter lists. She even made a video for you!

Use the comment section to let me know how you currently use Twitter lists and if you never have, let me know if you make one. If you want to see all my Twitter lists go to Twitter and find me @aliceheiman and click on lists.

It’s Noisy Out There

Are you using Twitter in your social selling strategy? Three-quarters of business-to-business buyers and 84% of C-level/vice president executives use social media to support purchase decisions, according to the International Data Corporation. So, why not use Twitter to make sure you are part of that decision? Twitter is a wonderful tool for prospecting, networking, connecting and keeping up with trends. It allows you to interact quickly and easily, without coming off too sales-y.

The problem is that it’s noisy out there—and I mean really noisy. If you follow hundreds of people on Twitter, the chances of you seeing every tweet from every person are slim to none. So, how can you break through the noise to listen to your prospects and customers and follow the trends? The answer is Twitter lists.

Break Through the Noise

I use lists to focus my time on Twitter. Instead of signing in and going to a news feed that displays a new tweet every second or so, I go to my Twitter lists.

In other words, you get to filter your newsfeed and organize your activity by grouping people into a list. It silences all other users except the ones in your lists and neatly puts them into one stream. To sum it up here are a few points:

There are two kinds of lists, public and private. Private Twitter lists are for your eyes only, and will not notify the people added to the list. Public Twitter lists are the same idea, but the people who you add can see you listed them in a group. The names of these groups can be flattering, such as “Top Sales Bloggers,” or something more generic, such as “People Who ReTweet Me”.

How Does This Help Me With Customers and Prospects?

You can use Twitter to guide you by creating 3 private lists: 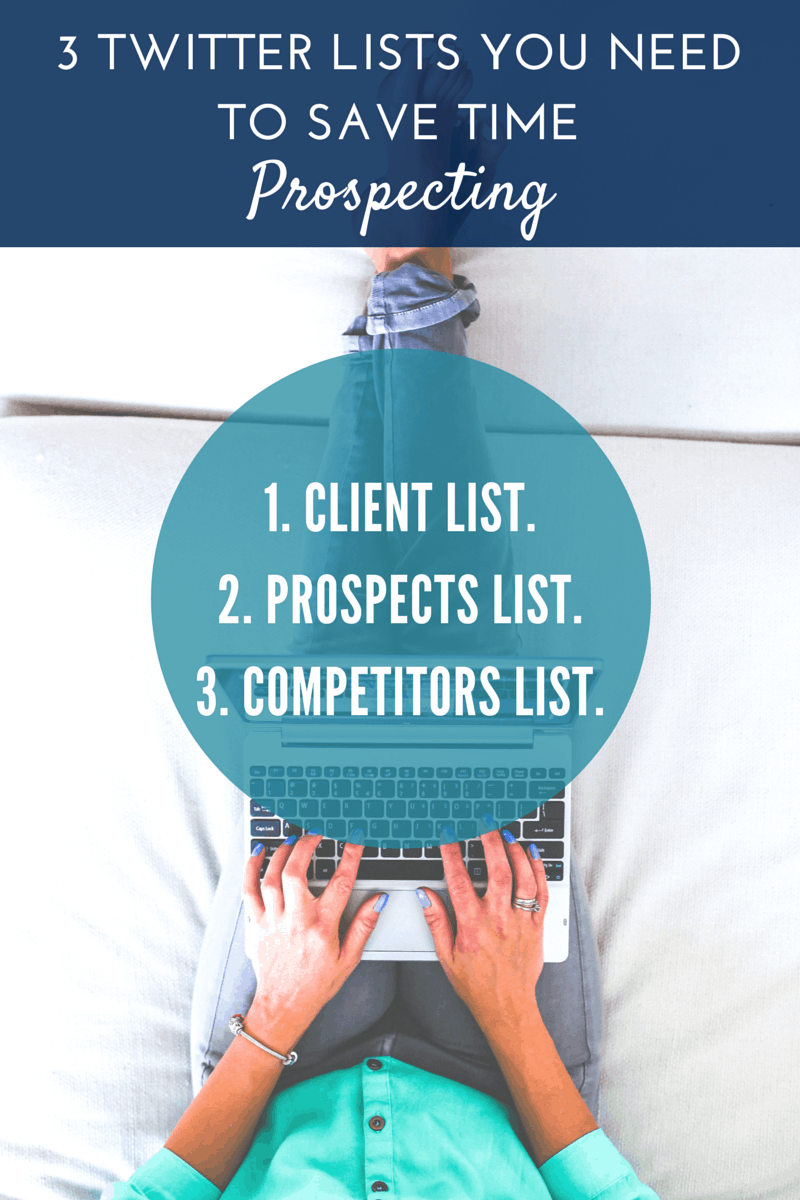 Add all of your clients to one list to stay current on what they post. By creating this list, you can easily share articles, retweet, interact and add value to your relationship. Having a client Twitter list will keep you better informed of your clients’ activities and help you engage with the posts that really matter. Most importantly, remember to share their posts and interact with them by favoriting their tweets or replying to their comment or question.

When you add all of your prospects to one list, you can easily interact with them. Look for what they are tweeting about. Are they pushing out their own blogs? If so, retweet them and add a comment to that retweet. Also, be sure to send them content that is relevant and useful to them. This list can also be a valuable source of information about your prospects to help further your relationship with them.

A list of competitors gives you a place to see exactly they are doing. You can see what’s working for them on Twitter and how they are promoting their business.

Twitter lists eliminate the noise and let you hone in on what really matters, whether that is engaging with your current clients, building a relationship with your prospects, or keeping an eye on your competitors. Twitter lists are crucial to making the most of your time on Twitter.

In case you haven’t made one before, here is a quick video I made that might help you:

Thanks, Sabra! You can follow Sabra’s musings at @sabraRubinstein.